Swami Kriyananda, aged 86, Ananda’s much beloved founder and spiritual leader, left his body and merged into the Infinite last evening (April 20) at 11pm Pacific time. He died in his home in Assisi, Italy (8am April 21 there). 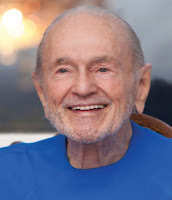 For several weeks he has not been feeling well and has spoken frequently about how difficult it had become for him to work through that body. He gave many hints that he might not be with us much longer. Still, his actual passing came peacefully but without much warning.

He had gone to bed early Sunday morning, about 2a.m. and got up at 7. He put on his robe and went from his bedroom to the dining room where his computer is also set up. He checked his e-mails, as he always does first thing in the morning.

Jaidhara offered him pancakes for breakfast and he nodded approval, but didn’t speak. When Miriam, his nurse, asked how he was feeling, Swamiji didn’t respond. At first she thought he was just withdrawn but then realized something else was wrong. He had a brief seizure, just a few seconds, but seemed to be recovering.

Then he had increased difficulty breathing. Shurjo and Narayani were also there with Swamiji. Anand and Kirtani were in the temple meditating and someone ran to get them. Swamiji continued to have difficulty breathing and those who were present began to chant AUM in his right ear, at the same time encouraging him to breathe. They moved him from the dining room to his bedroom. He lay on the bed struggling to breathe while they chanted AUM in his ear. Anand and Kirtani arrived. About 15 minutes later, he partially opened his eyes, very briefly and looked at Narayani who was standing closest to him. Then he closed his eyes, exhaled, and everyone in the room knew he was gone.

A feeling of great joy and freedom filled the room. Master had promised Swamiji: “God will come to you at the end of life. Death is the final sacrifice you have to make.”

Swamiji has fulfilled in every way his Guru’s commission to him. He has done the great work Master asked him to do. He has faced death, and now he is with God.

His body will be placed now in the Temple of Light in Assisi so everyone there can come and meditate with him. Jyotish and Devi are going to Italy right away and there will be a service there for Swamiji.

Several years ago, Swamiji requested that after he died his body not be cremated, but brought to Ananda Village and buried there. A  Mahasamadhi Mandir will be built over where his body is put and some plans have already been made to do this.


We have been deeply blessed to have had so many blessed years of Swamiji’s guidance and inspiration. We rejoice with him now in his perfect freedom in God.

Sunday Service will be dedicated to Swamiji. 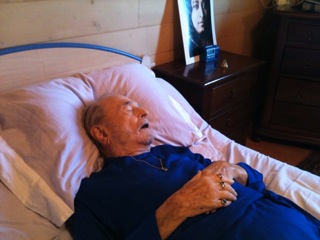 A photo of Swamiji taken shortly after his passing. 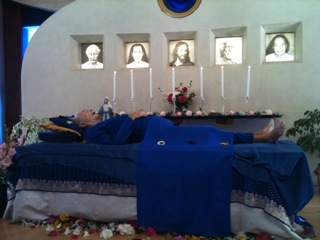 At rest in front of the altar in the Assisi temple.