An Amazing New Development for Ananda in the Bay Area

When Swamiji passed into the Infinite, it was as if an enormous wave of energy was released. As his body declined with the passing years, his consciousness expanded, until the body was simply too confining to hold it. For him it was a joyous release.

And once freed, Swamiji became able, so it seems, to be with all of us everywhere even more.

In Palo Alto, that sudden increase of energy flowing from a higher source has taken a very specific, and somewhat surprising form: the acquisition of a farm in Half Moon Bay. 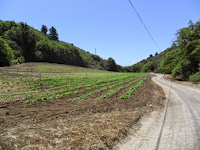 Those of you who are members of Ananda Sangha here have been following this story carefully over the last two months. What we are writing here is to bring our far-flung family up-to-date on the latest developments.

Whenever Swamiji would visit Palo Alto over the last decade, he would always urge upon us one important unfinished task: to get land farther away from the populated area, a safe haven where we could shelter and grow food if times become difficult.

None of us enjoyed hearing these predictions, but considering the source, we couldn’t ignore them either.

For years we had hoped to fulfill this commission by finding an existing conference center or retreat. That way we could run it as a business and also have it as a safe haven. Retreats, it turns out, are few and far between and we never managed to find a suitable one.

The very last e-mail we received from Swamiji, just days before he left his body, was again an urgent request that we buy land. Whenever he visited he would point toward the hills between us and the ocean and say, “Find land there.”

We decided to shift our focus from “retreat” to “working farm.” We were told that good farms, especially with sufficient water, are not that easy to find in an area where development is rampant and land is so valuable. We hoped farms were not as scarce as retreats.

We passed out the word to our members that the focus of our search had shifted, and people began to send to David reports of properties they found on the internet or heard about in other ways. 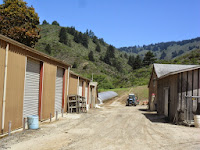 David reviewed on the internet some fifty possibilities, from nearby to 100 miles away. One property stood out above all the others. So much so that it came to David from a dozen different people.

Buying a farm was going to be a typical Ananda experience, i.e., many hands make a miracle. Which means: no money but lots of faith!

Fortunately, a long-time friend and devotee, James Morris, had recently become a Realtor. We signed up with him because we knew we could tell him the truth and he would still keep us as a client! He proved the perfect choice, not only energetic and capable, but also quite happy to start our “business meetings” with a prayer to Master.

We knew that if we could find the land, God and Gurus would give us a way also to buy it.

Which is exactly what happened. 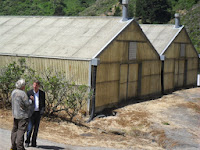 Some people believe that land has a mystic destiny and will find its owner. After our experience of acquiring this farm, we are inclined to believe it is true. It feels like home.

In this case, we’ll make it short because it is a short story: In six weeks we raised $1.8 million dollars. Yes, that is the right time frame and the right amount of money. As you all know, we are not wealthy people. But we are dedicated. It was thrilling to see how much we can do when we work together for God.

As it rapidly unfolded, we often joked that it was as if Swamiji, from the other side, was pushing money across to us! For years he had been telling us to buy land and he was going to make sure we followed his advice!

What we have bought is a working commercial farm, in the hills where Swamiji always pointed. It is two miles in from the ocean, just outside Half Moon Bay. The road ends in a secluded canyon that we are now calling Ananda Valley.

Even though you are literally just 10 minutes from a good cappuccino, when you are in Ananda Valley you feel as if you are miles from any other habitation.

And it is only 40 minutes from our Temple and community. 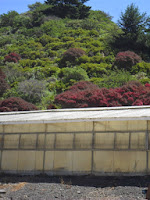 Some of the 67 acres goes up the brush-lined hills, but there are still about 25 acres of first-class farmland. There is also plenty of water—two wells, a creek, and an ever-flowing spring that comes out of granite rock, pure and drinkable.

There is no primary residence on the property, just a bunkhouse and several trailers where those who work on the farm can live. There is also a warehouse, a barn, three greenhouses, a mechanics’ shop, an irrigation pond, and all the equipment to run the farm.

Because it is so close to the coast, you can grow all year.

When God provides, He does it in style.

We are in escrow now and expect to own the farm sometime in the middle of August. Our idea is to make a farming-based ashram, calling it Ananda Valley Farm.

We are very fortunate in that the long-time manager of the farm is willing to stay on for the transition, perhaps well into the future. He has worked there for decades and knows every inch of both the land and all the systems and equipment. A great blessing indeed.

We are looking now for experienced organic farmers and also for those interested in learning, or just helping out in whatever way is needed. This is a big project. Definitely a many-hands-make-a-miracle moment!

If a farming-based ashram life appeals to you, either full-time or as an occasional volunteer, do let us know.

Although we have successfully managed the land purchase, there are many expenses ahead. If you are interested either in investing or donating to this project, please contact us right away.

We are planning a blessing and dedication ceremony in early October. (For those who have been following this project, note the change of date from September to October.)

We would love to welcome you and show you around Ananda’s newest home in the Bay Area: Ananda Valley Farm.

Blessings and joy,
David and Asha