We have about the same number of programs on this tour that we had on the previous one (although the whole tour is only 3 rather than 6 weeks) but we aren’t going from city-to-city as we did last year. Everything is happening in the Hamilton area where Kavita can follow-up on the energy.

So the pace is more relaxed. Days off are really free, rather than spent packing and driving.

Yesterday we took a perfect New Zealand hike. Weather cooperated precisely. Cool in the morning, sunny when we got to the “top,” not a drop of precipitation.

We are always looking up the weather reports and contrasting them with the actual experience. “It can’t be raining,” we say, even though we are watching a torrential downpour. “The internet says ‘zero chance of precipitation!’”

We didn’t actually count, but one day I believe it went from clear and sunny -- including a rainbow -- to pouring rain at least a half-dozen times in the course of a few hours. 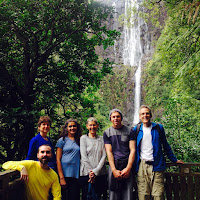 Yesterday we drove to Matamata to climb to the top of Wairere Falls. [We couldn’t help thinking, somewhat irreverently, if any of the senior SRF nuns retired to Matamata they could be Matamata Matas ☺ ] It was a “tramp through the bush” as it is called here. A well maintained trail, but still a rugged, uphill climb. And then, of course, down again.

Through deep forest, along a bubbling stream, then finally to the point where the placid -- surprisingly placid -- stream plunges over the cliff edge to become the hurtling torrent of Wairere Falls.

It was 5k round-trip, steep and rocky going up and then all had to be repeated on the downhill. Just a little more challenging than any of us -- especially the chronologically advanced semi-matas, i.e., Atmajyoti and Asha -- would have chosen in a perfect world. Although even Travis, our new Australian Kriyaban, admitted it pushed him, too. 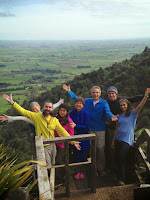 Last year, all our hikes proved to be a little less difficult than anticipated. This made up for all of them.

It was worth every bit of effort, though and every moment of, “How am I ever going to get down off of this mountain?” Nature has its own rejuvenating power, especially in this country where it seems many of the devas have gathered in a last stand against the appalling indifference of so much of the world to their subtle messages of cooperation, harmony, and beauty.

The theme of almost all of our programs has been meditation, what it is, how to do it, and how to do it better. Kavita has found that this is what people are looking for these days.

My oft-repeated comment is that in the 40 plus years I’ve been teaching meditation there has been a global shift of interest. Not everybody meditates now -- too much to hope for in early Dwapara Yuga -- but many more people feel guilty about not meditating! Progress of a sort.

It has worked well, in that we have attracted a serious group of students. It has been a little challenging on my intuition at times, because even though they are serious, only a handful of them actually have an ongoing meditation practice. So topics like: “How to take your meditation deeper” have no obvious answer for the crowd I may be facing.

Still, by the grace of God, ideas come and it is a joy to share. Tandava is filming everything and posting it to YouTube, so you can decide for yourself how well we are doing!

It has been my privilege almost from the beginning of my spiritual journey to be in continuous contact with those just starting on the path.

This has been one of the greatest blessings of my life because it has kept always before me the miracle of the spiritual path. Seeing the gratitude in the eyes of those just beginning is a constant reminder never to forget what it means, after lifetimes of wandering in delusion, finally to find the way home.

It began for me in the 70s when I was working as Swamiji’s secretary. At that time he was the primary meeting point between the public and Ananda and the teachings of Master through him. I coordinated his appointments, which made me the go-between for many souls just coming onto the path.

It has been the same ever since. Traveling for Ananda, being on staff at the
Retreat, developing the Palo Alto community, now going to other countries. Everywhere explaining our line of Gurus, the practice of meditation, Ananda, what it means to be a devotee.

It is so touching to see how God draws people to Himself. There are as many variations on that theme as there are devotees. Each of us has a unique, individual relationship with God.

Over time, whether through returning to the same cities after intervals of time, or living as we have with one branch of Master’s family and developing his work together over years, we see in each other’s eyes an ever brighter flame of love and understanding of what it is to be a devotee.

When we used to travel to the Northwest in the early 80s, before our Ananda colonies were started there, I gave a great deal of thought to the program we would offer. There is a definite “curriculum” that devotees of this path would do well to learn. Meditation and Kriya are central, but there is so much more.

One of my favorite courses from that era I called rather grandly, “How the World Works and Why.” Although the details have faded somewhat over time, as I recall it was karma, reincarnation, the need for a guru, the power of Kriya, and perhaps a bit of the Yugas thrown in for good measure!

Inevitably I followed a trajectory in educating others about these teachings that mimicked my own learning curve. Master has to use the instruments at hand in the way they can be used.

In addition to the philosophy, techniques, and principles, I also tried to include as much as possible of what I call “the Ananda culture.” Always in my mind was the idea that we were looking for Master’s children, inviting them into the family, and praying that they would find in Ananda and this path the same profound joy and satisfaction it has given me and countless others. Informal time together is essential. Also serving together, sharing with others the blessings we have received.

Like every family, Ananda has its unique world view. An appreciation for P.G. Wodehouse, for example.

Even classic lines from favorite stories, like, “We will now sing the school song!” Utterly incomprehensible unless you know the particular story from which it is drawn. In case you don’t know, here it is:

Bertie Wooster, the good-hearted, but often inept hero of many of Wodehouse’s stories, finds himself as the keynote speaker for an assembly at a school for girls. Unaccustomed as he is to public speaking, and unnerved by the beady-eyed stares of the students, Bertie begins telling jokes of dubious moral quality. The iron-willed school director interrupts his speech before the juiciest lines can be delivered, by declaring emphatically, “We will now sing the school song!”

In his public reading of this story, Swamiji rarely got through that line without himself bursting into laughter. Ever thereafter whenever Ananda folks find themselves in a dicey situation, especially an embarrassing moment in front of an audience, someone will invariably suggest, “We will now sing the school song!” Naturally, that comment is met with bewildered stares by the “uninitiated.”

Admittedly, this is a rather trivial example, but it illustrates the importance of bringing people completely into the Ananda world. The caste system, the yugas, the chakras are other more important examples that often find their way into everyday conversation, frequently with a humorous twist. So much of our humor has behind it an understanding of, well, how the world works and why.

I remember Jyotish once telling us about a movie that was well-done, but not particularly worth seeing, as “The touching story of a sudra becoming a vaishya!” In other words, of a totally unmotivated person developing selfish interests. Good for the evolution of the hero, but hardly inspiring entertainment for a yogi.

Coming back to New Zealand, it is deeply touching to see -- not sudras becoming vaishyas -- but kshatriyas (self-motivated idealistic people) becoming Brahmins --deepening their attunement with God, Gurus, and dharma. Very moving.

Our core here is still small, but every person is highly motivated, which makes it a joy to serve.

We had a small discipleship initiation on Sunday. Like the Kriya earlier that week, there is a special grace in these intimate ceremonies. We gathered in front of the altar afterwards for the usual picture.

With Facebook connecting us around the world, how many such photos have we seen, especially in recent years, of Kriyabans and disciples in so many countries. The setting is the same each time. The Masters on the altar, the devotees gathered in front. Whether a handful or a roomful, the spirit is the same: joyful recognition of the simple, but momentous implications of the initiation that has just taken place.

We may not speak the language, or know the names of those whose faces we see. But in their eyes we see reflected our own gratitude to God for bringing us, too, whether recently or long ago, to that moment of profound gratitude.

Sister Gyanamata put it perfectly when she said to Master that she knew he came with a world-changing mission, but she also liked to think that he came just for her. And he did.

Remember Babaji saying, that the spirit of potential saints in countries round the world came “flood-like” to him? For this reason, this line of Gurus incarnated again.

To change the world, by changing hearts, one by one, starting with yours, and mine.