I’m away from Palo Alto for about a month on a journey of several parts.

The timing was defined by a retreat with East Coast devotees. For many years, every spring and fall, the devotees in that region have gathered for a weekend at a rural retreat center in Massachusetts. Usually in the spring it is Kriya; in the fall the subjects vary.

Jyotish and Devi did the Spring retreat; I was invited for the Fall. The theme was discipleship.

Many of the devotees have been meeting together for years and are strongly connected, not only with God and Gurus, but with one another. What joy!

It was a glorious weekend. An honor to be part of it.

When I accepted the invitation months ago, I thought I would extend my stay adding programs in New York and perhaps Boston. But when it was time to make that calendar, my heart wasn’t in it.

For months I had been looking at the Pilgrimage to Israel sponsored by the Expanding Light. I wanted to go, but kept talking myself out of it for all the usual reasons — time, money, and pressing responsibilities.

When I was a tour leader to India for those years (1986-2006) many times I advised people: When pilgrimage calls, say “Yes.” Finally, I took my own advice and signed up.

I’ve always wanted to go to Israel. First, growing up Jewish, then when I came to Ananda, out of devotion to Christ. The life of Jesus is so vivid to me, when I read or speak of it I can almost see the places where he walked. Now I will see them.

Between the retreat and the pilgrimage, there was a week to fill, which I decided to spend in Assisi. I haven’t been back since April 2013, right after Swamiji’s passing.

There would be one satsang. Otherwise the trip was to see friends, and meditate in the holy places there, including the room where Swamiji passed from this world.

Tushti and Surendra lived in Palo Alto for about ten years, managing East West Bookshop, teaching classes at the Sangha, and endearing themselves to all of us.

In July, Tushti became mysteriously ill. At first she dismissed it as the usual tummy troubles of India, but it soon proved itself far more serious.

Eventually she was diagnosed with cancer in the abdomen. Today she begins her first chemo treatment. She is in the category of “most positive outcome” but it hasn’t been, and won’t be for awhile, a pleasant journey.

Tushti has spent almost 50 nights in the hospital since it began. Indian hospitals are more informal than American ones. Smaller, less techno, more heart-full. The family is encouraged to spend the night with the patient. Sheets and towels are provided and a surprisingly comfortable couch bed to sleep on.

Except for a few times when others have come to visit, Surendra has spent almost all of those 50 nights in the hospital with Tushti.

Looking at my week before the pilgrimage, I saw that I could easily add a flight and come to India instead of staying in Italy. So here I am.

I have to admit I felt a pang at giving up my time in Assisi. But Divine Mother, as always, had me in the palm of Her hand.

As soon as I met Surendra and went with him to the nearby hospital — Ruby Hall Clinic — and into the large, private room which is home for Tushti right now — I felt the living presence of Master and Swamiji surrounding us.

Surendra is kind and lovingly attentive as always. Tushti is like a child in the arms of her Mother.

On the wall in front of her bed there is a large picture of Master and also one of Swamiji. The doctors and nurses come in and out, but it is clear Who is really in charge.

The situation are so unusual — day and night together in the hospital, with no pressing responsibilities. It is rare at Ananda to have so much uninterrupted time just to be with friends.

Exactly what I had hoped for in Assisi — heart-to-heart and soul-to-soul with gurubhais.

The three of us have always been good friends, but this circumstance has drawn us even closer. 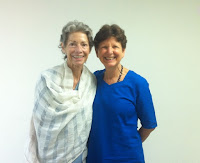 The road in front of Tushti in her treatments and recovery, and Surendra in support of her, is not going to be easy. But they are living the truth that Master so often asserted: “It doesn’t matter what happens to us. All that matters is what we become through what happens to us.”

Let us become saints together. This is the motto of Ananda.

Because of the pilgrimages we led, and later visiting Swamiji here, I’ve been blessed to spend much time in India. The country has always held my heart in a way no other place does. “Vitamin India” seems essential to my inner wellbeing. It has been almost two years since I last visited, and my system was craving what only India can give.

But that is not all.

As many of you know, for the past year or more I have been “working on a book.” This is, as I describe it, the “big book” about Swamiji I feel I was born to write.

I am a much more confident writer than I was a decade ago, but I confess to trepidation over this project. I haven’t yet reached the stage of procrastinating (out of lack of confidence) but I seemed to be getting ready to procrastinate! Oh dear.

A decade ago, when I was working on what became Swami Kriyananda As We Have Known Him, I spent almost a year reviewing and organizing a lifetime of notes. From the beginning I wrote down significant observations, events, and comments.

At the time I felt I should have been taking even more notes. Now I’m glad I didn’t! I have so many!

That first book turned out differently than I expected, being mostly stories I collected from others. The “files” were used, but only a little. All the years since they have been sitting — organized and ready — waiting for this project.

I am not able to think clearly about material that is only in the computer. So scanning has never been an option. I felt I couldn’t start writing until I had the whole picture. So the past year I’ve been “working on the book,” i.e. reviewing the files but haven’t started the actual writing.

Insights, understandings, relationships between events have become clear to me in ways they never were before. I am down to just 6 inches of paper, which I brought with me, and this is helping pass the time in a useful way during hours of plane flights.

Even though writing is no longer as difficult for me as it was a decade ago, I have been more anxious than I’d like to be about this project. I’ve been joking with my friends that I either need to start writing this book or stop talking about it!

So here I am in Pune, with Tushti and Surendra in the Ruby Hall Clinic. Tushti is remarkably better (according to Surendra) from the low ebb she reached earlier in this journey. She had a blockage in her stomach and wasn’t able to eat which has a rather deleterious effect on one’s energy. That was taken care of through surgery, nutrition through an IV, the insertion of a stent, and now, finally eating again. By comparison, she is absolutely peppy!

We walk several times a day through the hall of the hospital. She has a few visitors and we’ve had many lovely conversations.

I offered to read aloud to her. My choice was Swami Kriyananda As We Have Known Him. Short sections, interesting, inspiring. Seemed ideal.

I haven’t looked at that book in many years, but always think of it with great satisfaction. I know it came out well. Even more important though, for me personally, I know I did my best. Great satisfaction in that.

So I started reading it to Tushti.

You all know me, so you’ll understand this in the way I intend it: It is an excellent book. The author writes so movingly about Swamiji. Some times I had to stop reading until my tears subsided. It is sensitive, well written. Reading aloud, hardly a word needs changing.

I had forgotten, Divine Mother, how you work through me when you have a job to be done.

If I hadn’t come to India, I wouldn’t be reading that book aloud and I would never have known. This alone has made the entire trip worthwhile, and I haven’t even reached Jerusalem.

We live in the palm of Divine Mother’s hands. What a grace-filled, glorious place to be.

Love in God and Guru,
Asha